Type 2 diabetes mellitus (T2DM) is a widespread condition worldwide, linked with an increased risk of developing some form of heart disease, referred to as “Diabetic Heart Disease” (DHD) (1). In particular, DHD is characterized by a progression of coronary endothelial and vascular dysfunction, and left ventricular dysfunction and remodeling, which impact on cardiac function (2).

Although many approaches to reducing cardiovascular risk in diabetes have been developed, the possibility to manifest heart failure in these patients is still present. Several experimental studies have shown that active lifestyle or increased physical activity is an effective non-pharmacological approach to reduce cardiovascular events and to support the pharmacological therapy of DHD (3,4). In T2DM subjects, regular exercise is able to improve myocardial function with amelioration of endothelial and left ventricular function, but positive effects of exercise on DHD might depend on both exercise intensity and on the moment in which it is started (5-7). However, very often exercise is initiated when cardiovascular diseases are present. Therefore, it is not clear whether early exercise training or high intensity exercise approaches would be more effective in limiting T2DM related cardiovascular complications.

In order to investigate the efficacy and mechanisms of exercise training in preventing cardiovascular dysfunction during the onset and progression of DHD, in a recent issue on Circulation Research, Lew et al. (8), used a diabetic mouse model (db/db) subjected to moderate or high intensity exercise for 8 weeks. At this age this model is characterized by hyperinsulinemia and hyperglycemia, with a typical obese phenotype without apparent cardiac and coronary dysfunction. The authors demonstrated that both moderate and high intensity exercise training prevent the disruption of coronary and cardiac dysfunction if started in an early stage of diabetes (by 8 weeks of age) and continued for 8 weeks. On the contrary, if exercise is initiated in an advanced diabetic phase, after DHD has already become established (i.e., in 16 weeks old mice), only high, and not moderate exercise training is able to mitigate cardiovascular dysfunction (Figure 1). Therefore, this study confirms that exercise is beneficial, but suggests that benefits depend on timing and intensity. The fact that only high intensity exercise is beneficial in the late stages is worrying as physicians may be reluctant to recommend high intensity exercise when cardiac and coronary dysfunction are present. Therefore, once again we can conclude that regular, early in life, moderate exercise is better. 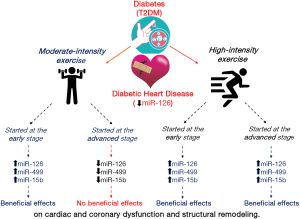 Figure 1 Experimental workflow followed in Lew et al. study (8). Results suggest that when exercise is initiated at early stage (8 weeks old db/db mice) both moderate and high-intensity exercises mediate cardiovascular beneficial effects. However, when exercise is initiated at late stage (16 weeks old db/db mice), only high-intensity exercise intervention is able in ameliorating the progression of diabetic heart disease (DHD) through the normalization of cardiovascular-enriched miRNAs, which are dysregulated in DHD.

An important aspect of the article by Lew et al. (8) is the role of microRNAs (miRNAs), a class of noncoding RNAs (~22 nucleotides), recognized as main molecular regulators of pathophysiological processes (3). Indeed, it has been reported that the structural and functional myocardial changes related to the progression of diabetes seem to be associated with alterations in the expression of microRNAs (miRNAs). Several preclinical studies have shown that the dysregulation of specific miRNAs is associated with vascular damage in DHD, therefore the modulation of cardiac miRNA expression may have beneficial effects in reducing cardiovascular abnormalities in diabetes (9). Exercise training represents a promising tool to modulate miRNA dysregulation and to reduce diabetes-induced cardiac damage (10,11). Among the miRNAs involved in regulating angiogenesis and vascular integrity in the DHD, miR-126 seems to be one of the most important (12). Thanks to the location of miR-126 in an intron of Egfl7, a gene that is highly expressed in endothelial cells, it represents the most enriched miRNA in endothelial cells (13,14). miR-126, through the repression of sprout-related protein-1 (Spred-1), which is the main negative regulator of the vascular endothelial growth factor (VEGF) signaling, promotes the activation of VEGF pathway. For this reason, the miR-126 represents an important regulator of angiogenesis, endothelial proliferation, differentiation, and survival. Indeed, DHD is characterized by downregulation of VEGF, which is a proangiogenic factor, and by upregulation of Spred-1, which is an antiangiogenic protein.

Besides to show that only high-intensity exercise was effective in late stage, Lew et al. (8) highlighted the role of miR-126 as a potential diagnostic biomarker for the detection of vascular dysfunctions in early diabetes. Real time PCR revealed the circulating and cardiac reduction of miR-126 expression before exercise and its overexpression at the end of the exercise training. Interestingly, miR-126 silencing, using an injection of anti-miR-126, abolished the exercise-mediated protection, while miR-126 upregulation, using an injection of pre-miR-126 mimic, restored the protective effect of moderate exercise training in advanced phase of diabetes. Additionally, as already demonstrated by other authors (15,16), Lew et al. (8) revealed the anti-apoptotic and anti-fibrotic role of miR-499 and miR-15b, respectively. The authors found that both moderate and high-intensity exercise favored the increased of miR-499 and miR-15b expression (Figure 1), while in DHD these miRNAs were downregulated, with significant upregulation of anti-angiogenic Spred-1 (miR-126 target), pro-fibrotic CTGF (miR-15b target) and pro-apoptotic cleaved caspase-3 (miR-499 target).

Therefore, as previously shown in the literature, Lew et al. (8), confirmed the alteration of coronary perfusion which lead to cardiac dysfunction in T2DM. The efficacy of increased physical activity has been shown to be variable depending on exercise intensity and the phase at which training started. The impairment of vascular miRNAs, miR-126, miR-15b, and miR-499 lead to cardiovascular pathological remodeling in DHD. However, for the first time, the authors demonstrated that exercise intensity, and the timing at which the exercise is initiated after early diabetes diagnosis, are key factors for cardiovascular integrity. In addition, they identified an important role of non-coding miRNAs as biomarkers of the development of DHD and as effectors through which exercise is able to mediate its cardioprotection. The detection of plasma miR-126 may help in understanding the early prognosis of DHD and, thus, may be used as a potential biomarker in diabetic patients.

Physical inactivity figures as one of the most important factors of the burden of T2DM, coronary heart disease, breast and colon cancers and premature mortality, killing more than 5 million people every year, besides its social and economic impacts (17,18). Worldwide, 3 in 4 adolescents (aged 11–17 years) and 1 in 4 adults do not currently meet the global recommendations of 150 minutes per week of moderate-intensity physical activity, which is even more challenging now during the COVID-19 pandemic (19,20). From the study of Lew et al. (8) it is clear that in pre-diabetic conditions a moderate early exercise may be beneficial. Therefore, people should, in any case, keep exercising whenever possible to reduce the burning deriving from inactivity.

We thank Prof. Claudia Penna for the critical reading of the final manuscript. The authors are supported by University of Torino, Italy.

Conflicts of Interest: Both authors have completed the ICMJE uniform disclosure form (available at http://dx.doi.org/10.21037/ncri-20-8). The authors have no conflicts of interest to declare.