Towards a universal nomenclature standardization for circular RNAs

Circular RNAs (circRNAs) are non-coding RNAs generated by a non-canonical splicing phenomenon, constituting a very dynamic family of molecules with a wide regulatory potential (1). Their ubiquitous presence and functional relevance within cells have been described in the last decade (2), but this subject has recently become a very vibrant and hot scientific topic as stated by the number of peer-reviewed manuscripts published in the last year 2019 (~1,500 papers in 2019 as indexed in PubMed database).

Scientists working on the circRNA field are currently facing the problem of the lack of standardization in the nomenclature of these molecules, which prevents the validation of experimental results and a deeper knowledge about their functional roles. Despite of the efforts of several research groups for the building of central resources to compile circRNA information, the databases are incomplete, not interconnected, constituting isolated islands and all of them have their own nomenclatures to annotate circRNAs. There are databases compiling restricted groups of circRNAs and their functions in the context of functional events or producing species, but only four resources could be considered as general-purpose and resource databases for circRNAs: circBase (3), circBank (4), CIRCpedia (5) and circAtlas (6). circBase was the precursor database and proposed a specific nomenclature for circRNAs which includes the species and a numeric code, whereas circBank and circAtlas use a more friendly annotation considering also the gene symbol of the transcriptional unit responsible for the generation of a circRNA based on the genomic coordinate references from UCSC resources (7). CIRCpedia uses a specific denomination for each circRNA, including the original species and an internal number without the reference to the source gene, as observed in circBase nomenclature (3). Together to these all different nomenclatures, there is an additional layer of complexity motivated by the presence of specialized companies devoted to the commercialization of molecular biology products, that also proposed their own and proprietary annotation for circRNAs, which is only accessible if the interested scientists are customers. Due to this complex scenario, research papers describing screenings or individual characterization of circRNAs are full of different nomenclatures including the already described sources, but also proposing new ones. Under these circumstances, the replication of functional results regarding a specific circRNA or even the simple obtention of its sequence is almost a “mission impossible”.

Due to the scientific background already available, the field of circRNAs is mature enough to be supported on solid foundations, and the existence of a normalized nomenclature in all databases is essential. An excellent illustration about how universal nomenclature can contribute to the scientific progress and data interchange in the field of ncRNAs is the miRbase resource, devoted to the compilation of microRNA (miRNA) data (8). This database has evolved during the last fifteen years adapting itself to the evolution of laboratory techniques used for the characterization of miRNAs and the increasing available data from different species. Current miRbase version is 22.1, and includes information about miRNA sequence, biological origin, relative expression and biological function, based on a standard annotation scheme (8).

Considering the exposed facts, we strongly believe in the need of a standardized annotation for circRNAs, which also might be complemented by methodological rules that should be followed for the scientists within the field. We propose the following recommendations for the annotation and publication of data related with circRNAs: 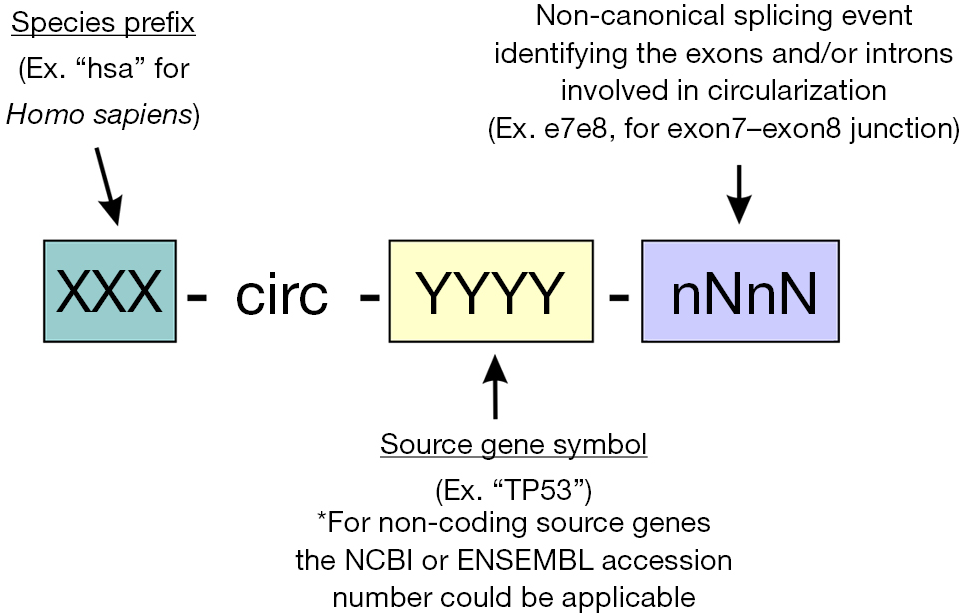 Figure 1 Proposed normalized nomenclature for the universal annotation of circRNAs. The unified nomenclature includes a system based on existing circBank and circBase entries, complemented by the identification of the back-splicing event and the exons or introns involved.

Conflicts of Interest: Both authors have completed the ICMJE uniform disclosure form (available at http://dx.doi.org/10.21037/ncri.2020.03.01). All authors report grants from Fundação para a Ciência e a Tecnologia (FCT), during the conduct of the study. FJE serves as an unpaid editorial board member of Non-coding RNA Investigation from May 2019 to April 2021.