Gestational diabetes mellitus (GDM) is defined as any degree of glucose intolerance at first recognition during pregnancy (1). It is usually diagnosed at 24–28 gestational weeks, according to the recommendations of international associations and committees (2). Diagnosis is made using a sequential model of universal screening with a 50-g one-hour glucose challenge test (GCT), followed by a diagnostic 100-g three-hour oral glucose tolerance test (OGTT) for women with a positive screening test (3). The overall incidence of GDM is increasing worldwide, affecting approximately 7–15% of all pregnancies (4). It is considered the most frequent metabolic problem during pregnancy, representing about 90% of risky pregnancies (5), although the prevalence of pregnancies complicated by diabetes (gestational or pre-gestational) varies geographically and among different ethnic groups (6). During healthy pregnancy insulin resistance increases due to the secretion of a series of placental hormones antagonists to insulin (cortisol, prolactin, progesterone and lactogen), ultimately causing blood glucose to rise (6). Furthermore, in GDM women insulin production is insufficient to counteract this increasing insulin resistance, due to an increase in β-pancreatic cells apoptotic rate which leads to an abnormal production and secretion of insulin (7). Given that blood glucose easily goes through placenta by facilitated diffusion, it reaches the fetus producing fetal hyperglycemia (8).

GDM has been associated with substantial adverse health outcomes for both mothers, who have considerably elevated risk for impaired type 2 diabetes mellitus (T2D) in the years following pregnancy, and the offspring, who are more likely to develop macrosomia, prenatal morbidity, prematurity and cardiomyopathy, as well as an increased risk of obesity and insulin resistance in adulthood (9), as a result of developmental programming (10).

The underlying pathogenic mechanisms behind this abnormal metabolic risk profile in the offspring are unknown, but epigenetic changes induced by this altered intra-uterine milieu are implicated (10). Among the epigenetic processes potentially involved, there is now increasing evidence that non-coding RNAs, like microRNAs (miRNAs), play a role in the development of metabolic diseases. In this sense, in recent years it has been shown that miRNAs regulate genes involved in metabolic processes such as glucose homeostasis, insulin signalling, pancreatic β-cell function, lipid metabolism, and inflammation (11,12).

miRNAs are short (18–25 nucleotides), noncoding RNA molecules that regulate posttranscriptional gene expression by promoting mRNA degradation or by repressing protein translation (13). miRNAs are not exclusively intracellular but they can be released from cells where they are generated and exist stably as circulating miRNAs (c-miRNAs) in blood and in other easily accessible biologic fluids (such as urine, saliva, amniotic fluid and breast milk), associated with proteins, extracellular vesicles (exosomes or microvesicles) or in a complex with lipoproteins (14,15). c-miRNAs can be actively or passively released from tissues and regulate the gene expression of distant cells, acting as a true intercellular communication mechanism in an autocrine, paracrine, or endocrine mode (16,17). Furthermore, Li et al. (18) demonstrated that small non-coding RNAs can be transplacentally transmitted from the mother to the fetus, contributing to the maternal-fetal crosstalk and to the epigenetic legacy.

In the last couple of years, a considerable amount of information has been published describing the association of GDM with the expression of certain miRNAs (6,19-26) (Figure 1). There are some evidences that dysregulation of miRNAs in GDM may arise from altered miRNA machinery. In this sense, Rahimi et al. (27) detected the upregulation of Drosha, Dicer and DGCR8 in blood samples of GDM women compared to healthy pregnant women. These results suggest that miRNAs are involved in the pathogenesis of GDM. Most studies have analyzed maternal blood samples (6,20), plasma or serum, during pregnancy, since it is an easily accessible and non-invasive fluid. In other studies, maternal samples were obtained after delivery, such as placental tissues (6,19,21,22,25,26), omental adipose tissue (6) and human umbilical vein endothelial cells (HUVECs) (6,23). Moreover, two studies have assessed miRNA expression in the offspring: one in skeletal muscle of adult offspring of women who had developed GDM (6) and the other in feto-placental endothelial cells (fpEC) (24). 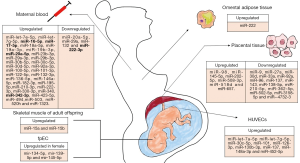 Figure 1 MicroRNA profiles in GDM in different samples: blood, omental adipose tissue, placental tissue and human umbilical vein endothelial cells (HUVECs) from the mothers and skeletal muscle and feto-placental endothelial cells (fpEC) from the offspring. miRNAs in bold are described as dysregulated in more than one article.

It has been observed that changes in the levels of certain c-miRNAs occur before changes in blood glucose become detectable, which underscores their potential value as early biomarkers of GDM. However, the information available about the usefulness and viability of c-miRNAs either as early biomarkers of GDM, to control the progression of the disease, or for therapeutic purposes (14) is scarce and, to a certain extent, contradictory and incomplete. In this sense, lifestyle variables could have a confounding effect, due to their influence on c-miRNA profiles.

It has been previously described that lifestyle factors, such as physical exercise, alter c-miRNA profile (17). Most of these studies demonstrate that acute exercise and training elicit changes in the type of c-miRNAs and its expression levels in both healthy and diseased people, including type-2 diabetic patients. This profile has been suggested to depend on the mode, intensity, and dose of exercise (17). Physical exercise is a useful tool to reduce the risk of GDM and it is a metabolic risk modifier for the mother and the fetus. In the management of women with GDM, there is evidence that exercise, structured aerobic and/or resistance training, is a beneficial adjunctive therapy (28). Moreover, maternal exercise performed before, during and after pregnancy has also been shown to provide significant benefits to the fetus health: increased amniotic fluid, placenta viability and volume, and vascular function; faster placenta growth and greater villous tissue; lower risk of macrosomia and preterm birth; improved neurodevelopment; and lower fetal body fat percentage (28). All these findings suggest that one of the mechanisms involved in this protection mediated by physical exercise could be miRNA expression and secretion to the blood stream.

Therefore, there is a need for understanding the effect of exercise performed during pregnancy, particularly by women developing GDM, on plasma c-miRNA profiles. This may help in explaining the role of these epigenetic regulators in the molecular pathways involved in the benefits exerted by regular exercise during gestation for diabetic pregnant women and in the reduction of metabolic risk to the offspring. Furthermore, combining both the c-miRNA signature and lifestyle variables, particularly exercise, will greatly enhance the accuracy of the predictive value of c-miRNAs as early biomarkers of GDM risk and may also permit trajectories of risk to be tracked to monitor the efficacy of interventions in order to avoid or decrease some metabolic risks for both mother and fetus (29).

Provenance and Peer Review: This article was commissioned by the editorial office, Non-coding RNA Investigation. The article did not undergo external peer review.

Conflicts of Interest: All authors have completed the ICMJE uniform disclosure form (available at http://dx.doi.org/10.21037/ncri.2019.08.01). The authors have no conflicts of interest to declare.