As the capacities of proliferation and self-healing of cardiomyocytes in adults are limited, treatment of ischemic myocardium after acute myocardial infarction (AMI) led to a trend of investigations and research into human embryonic stem cells/induced pluripotent stem cells, cardiac stem/progenitor cells, bone marrow (BM)-derived cells including mesenchymal stem cells, and endothelial progenitor cells to promote cardiac neovascularization and repair of the ischemic injury to rescue the ischemic myocardium and function of the heart (1-3). Among these stem cells and progenitor cells, in consideration of safety and efficiency, BM-derived cells are preferentially applied in cardiac regenerative medicine thanks to their easy acquisition from BM or blood, and their capacities of differentiating into cardiomyocytes, angiogenesis, vascular endothelium repair, and secreting of cytokines and chemokines to repair ischemic tissue and restore coronary function (3-6). In patients suffering AMI, natural recruitment of new myocytes occurs within two weeks after the infarction, early intracoronary infusion or injection of BM-derived cells is feasible and can improve ventricular function, a series of clinical cell therapy trials demonstrated the efficacy of BM-derived cells developing therapeutic effect (6-8).

Exosomes present a promising therapeutic option in cardiovascular medicine. Exosomes are vesicles released by diverse cells, and as intercellular communication messengers, exosomes can fuse various molecules, proteins, DNA fragments, mRNA, miRNA and enzymes, and mediate function signals and material exchange between cells (8,9). These materials carried by exosomes empower the ability to rescue the peri-infarcted region and reprogram cardiomyocytes. One important property of exosomes in the repair and protection of damaged myocardium in AMI is their ability to carry and transmit non-coding mRNA, including miRNA, which are considered to possess the ability of being biomarkers and to regulate cell differentiation, metabolism, and gene silencing. Some myocardial miRNAs (miR-1, miR-208, miR-133, miR-499, and others), which have been found in rich fusion in exosomes after AMI, serve as reliable markers of myocardial injury and possess the abilities to repair ischemic tissue and maintain normal cardiac function. In this context, Cheng et al. also showed that these aforementioned myocardial miRNAs are prominently elevated in peripheral blood after AMI and efficiently transferred into BM. As the ischemic signals are sent by exosomes and miRNAs, BM-derived cells are released into the peripheral circulation and then accumulate at the site of ischemic myocardium to trigger its repair. In view of the promising prospect of using BM cell therapies for AMI, the article by Cheng et al. proved a novel mechanism for the mobilization of BM-derived cells mediated by the suppression of CXCR4 in these cells by the exosomes carrying myocardial miRNAs, which may induce a systemic response to the cardiac injury to repair the ischemic myocardium. These mechanisms also apply to the repair of ischemic myocardium by BM-derived cell therapy in patients with AMI.

We propose a viewpoint for BM-derived cell therapy, although the outcomes from clinical studies are still inconsistent. BM-derived cell therapy has been performed extensively, and many studies have confirmed the availability and validity of this therapy for cardiovascular diseases, whereas other studies have refuted the benefit of these cells (4). To optimize the efficacy of stem cell therapy, it is critical to elucidate the underlying mechanisms mediating the beneficial effects of stem cell transplantation. As cardiovascular diseases are complex disorders owing to their complex pathologic mechanisms, the mechanisms affecting therapeutic intervention in individual patients are also complex. The ischemic condition, oxidative stress, harvesting of high-quality cells, the method of cell transplantation, doses and timing of cell infusion, and growth factors have all been shown to affect stem cell efficacy. Mobilization from BM and invasion of BM-derived cells into the ischemic tissue is one mechanism affecting this efficacy. Significant mobilization of circulating stem cells and progenitor cells were found after AMI, and early cardiac homing of these cells after intracoronary infusion can decrease the progression of infarction and improve treatment efficiency in AMI patients (4). As the exosomes and miRNAs rapidly increase after AMI endowing with the ability to mediate the systemic response of stem cells and progenitor cells transferring to the site of injure to recover the ischemic myocardium, give the evidence early cardiac homing for BM-derived cell therapy in AMI is vital to improve efficiency.

Myocardial granulocyte colony-stimulating factor (G-CSF) and SDF-1 were found while acting as a chemoattractant factor, as well retaining proangiogenic cells in the perivascular region to improve different stem and progenitor cells in periphery blood (4,5). Blockade of CXCR4 increases the incorporation of BM-derived cells into ischemic myocardial tissue, promotes neovascularization, and attenuates inflammatory cell recruitment after AMI to enhance the recovery of ischemic tissue (10). In addition, myocardial CXCR4 is necessary for improving cardiac function after AMI, absence of myocardial CXCR4 causes significant loss of functional benefit in BM-derived cell-mediated repair, the match the timings of the peaks of SDF-1 and CXCR4 may determine the effects of BM-derived cells in AMI. Further evidence is needed to clearly define the role of CXCR4 (11).

Cheng et al. showed that downregulation of CXCR4 expression by exosomes carrying miRNAs in BM-derived cells accelerates the mobilization of BM-derived cells to peripheral blood, to home in the target of repair (Figure 1). BM-derived cells also have the ability to secrete complex exosomes with miRNAs, cytokines, growth factors, and chemokines, possess multiple homing properties, engraftment, paracrine activity, angiogenesis or differentiation (4). This peculiarity makes BM-derived cells a very promising future therapy in AMI not only through cell-cell interactions but also through multiple paracrine pathways. The therapeutic mechanisms of BM-derived cell therapy in AMI may depend extensively on these properties and require more brilliant clarification, such as that provided by Cheng et al., through additional pre-clinical and clinical studies to acquire effective approaches and outcomes for the treatment of ischemic cardiovascular diseases. 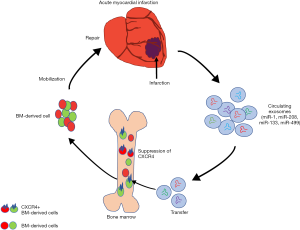 Figure 1 The mechanism of bone marrow (BM)-derived cell mobilization mediated by the suppression of CXC-chemokine receptor 4 (CXCR4) in BM-derived cells by exosomes carrying myocardial microRNAs (miR-1, miR-208, miR-133 and miR-499) after acute myocardial infarction may induce a systemic response to the cardiac injury to repair the ischemic myocardium.