Circular RNA: closing the loop for miRNA translation to patients

MiRNAs (miRs) have been widely studied in all aspects of medicine. However, the method by which miR-mediated functions are negatively regulated remains an unresolved question. The identification of circular RNA (circRNA) has been shown to act as sponges for miRs (1). The paper by Zhang et al., shows circDYM serving as a sponge for miR-9 (2). The authors linked their findings to major depressive disorder (MDD) in experimental models with human samples. The findings with human samples were then validated with two animal models of depression, chronic unpredictable stress (CUS) and lipopolysaccharide (LPS)-induced.

The findings of the paper are important because miR-9 has been linked to normal and pathological brain functions including brain malignancy, such as glioblastoma multiforme (3-5). Zhang et al. reported on a decrease of circDYM in the circulation of MDD patients. Since experimental studies needed an animal model, the authors nicely show a similar finding with respect to decreased circDYM in the circulation of the two in vivo models of depression. Gain of function studies showed circDYM improving the depressed behavior of the experimental model and also showed a decrease of neuroinflammation.

In trying to understand the observation, the authors identified miR-9 as the partner molecule that sponges onto the circDYM. The sponging effect removed free miR-9 and this ameliorated the symptoms linked to depression. The targets of miR-9 can be exhaustive since this miR is involved in developmental processes as well as regulating Patch 1 expression. The decrease in Patch 1 is fundamental to several biological processes since this receptor negatively regulates the sonic hedgehog pathway (5). In this regard, the identity of a circRNA that sponges Patch 1 could be important in understanding how the hedgehog pathway is involved in pathological and normal processes.

The paper reported on a conserved domain of E3 ubiquitin ligase 1 (HECTD1) that is a target of miR-9. Thus, expressed circDYM removes active miR-9, leading to the expression of HECTD1. This caused a decrease in neural inflammation in the experimental model of depression leading the authors to conclude that HECTD1 negatively regulates miR-9-mediated activation of microglia.

The investigators further examined the consequence of reduced circDYM in depression. They asked for a downstream target of HECTD1 and found that this molecule is needed for ubiquitination of HSP90. The HECTD1-HSP90 axis could explain how depressed pathology in particular neuroinflammation was negatively regulated at the molecular level. A summary of the findings by Zhang et al. is shown in Figure 1. The circle on top shows patients with MDD with decreased circDYM and this was shown experimentally to have an increase of miR-9. These changes resulted in neuroinflammation and depressed behavior. The molecular effects were reversed with circDYM, which sponged miR-9 resulting in increased E3 ligase and decrease in HSP90. 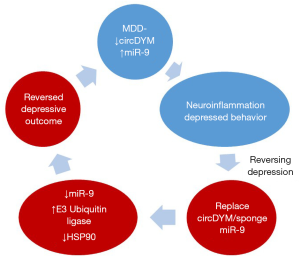 Figure 1 Molecular sequence of major depressive disorder (MDD). Shown at the top is a decrease of circDYM in MDD patients (also in two experimental models of depression). circDYM can act as a sponge for miR-9, hence its increase in MDD. The decrease in circDYM leads to neuroinflammation and behavior linked to depression. To reverse the process (red), circDYM is replaced and this cause miRNA to be sponged causing its decrease. This caused an increase in E3 Ubiquitin ligase and decrease in HSP90. These total effects reversed neuroinflammation.

This paper shows an excellent method to target depression. However, HSP90 is important for proper protein folding as well as other biological processes (6). Going forward, this treatment will need to consider the untoward effects of decreasing HSP90. Also, while a decrease in miR-9 is an advantage to depression as well as emerging brain tumor, one has to remember that this miR is involved in development. The investigators focused on miR-9 but did not discuss the possibility of circDYM as sponge for other miRNAs. Future studies, along the theme of this study, will need to incorporate the possibility that they are also decreasing other miRNAs.

Conflicts of Interest: Both authors have completed the ICMJE uniform disclosure form (available at http://dx.doi.org/10.21037/ncri.2019.04.02). The authors have no conflicts of interest to declare.