LncGata6-controlled stemness in regeneration and cancer

Long-noncoding RNAs (lncRNAs) have been proposed as a critical regulator of various cellular processes including cell fate decision and cell proliferation (1,2). Mechanistically, lncRNAs control various gene expressions by recruiting the chromatin modifiers in cis and trans modes (1). Transcription of lncRNAs itself also can activate or suppress the neighboring gene expression by the transcriptional interference through regulatory sequences (1,3). lncRNAs are also involved in a wide range of protein and RNA regulatory functions, such as scaffoldings of proteins and RNAs, protein and RNA decoys, and functional micro-peptides production (1). Aberrant regulation of lncRNA-mediated cellular processes is implicated in human disease including cancer (4,5). The recent technologic advance including the single-cell RNA sequencing (scRNA-seq), and gene editing, genetically engineered mouse (GEM) models has made it feasible to elucidate the various roles of lncRNAs in the normal tissue physiology and the pathologic conditions including tumorigenesis and metastasis (2,6).

Intestinal stem cells (ISCs) have been considerably studied among tissue stem cells, mainly due to constitutive replenishment of intestinal epithelium (3 to 4 days) and availability of various GEM models visualizing the ISCs and progenitor cells (7). The intestinal crypts include two different types of ISCs: the highly proliferative crypt bottom columnar (CBC) ISCs (marked by Lgr5, Ascl2, or Olfm4) and the relatively quiescent ISCs (qISCs) (labeled with Bmi1 or Tert). CBC ISCs constitutively divide into the progenitor cells for intestinal homeostasis (8) whereas qISCs become mitotic for intestinal regeneration upon injury (9,10). Additionally, cell plasticity takes place for interconversion between CBC ISCs and qISCs. For example, Lgr5+ ISCs are generated from Bmi1 and Tert+ ISCs during radiation-induced intestinal regeneration (9,10). Wnt/β-catenin signaling is activated in the intestinal crypts by Wnt agonists secreted from the mesenchymal cells and the Paneth cells (11,12). Such endogenous Wnt/β-catenin signaling activity is required for the constitutive division of CBC ISCs and the terminal differentiation into the Paneth cells (11,13). Upon radiation injury, Wnt2b is upregulated and hyperactivates Wnt/β-catenin signaling in Tert+ ISCs, which leads to the quiescence exit of Tert+ ISCs for intestinal regeneration (10). In addition to developmental signaling, WINTRLiNC1, a neighboring cis-LncRNA of ASCL2 upregulates ASCL2, a regulator of ISCs, in colorectal cancer (CRC) cells (14), implying the potential involvement of lncRNAs in intestinal homeostasis and regeneration.

With an extensive collection of experiments, Zhu et al. recently identified LncGata6 as a regulator of stemness in ISCs and CRC (15) (Figure 1). Using the Lgr5 reporter knock-in mouse, and organoid system, they found that LncGata6 expression is specifically enriched in the Lgr5+ ISCs and required for ISC-derived organoid growth. Similarly, genetic ablation of LncGata6 impairs both intestinal homeostasis and regeneration in GEM models. Mechanistically, LncGata6 recruits the NURF (nucleosome remodeling factor) complex to the promoter of Ets homologous factor (EHF) and transactivates EHF expression. EHF was shown to enhance the expression of Lgr4/5 receptors, which subsequently hyperactivates Wnt/β-catenin signaling. Based on these results, the authors proposed that the specific expression of LncGata6 is indispensable for Wnt/β-catenin signaling activation for intestinal homeostasis as well as regeneration. 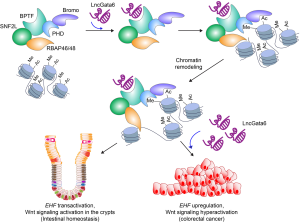 Intriguingly, this study demonstrated that lncRNA is physically and functionally associated with the epigenetic modality in modulating tissue stem cells. Epigenetic regulation including histone modification and chromatin remodeling plays vital roles in controlling the stemness maintenance and differentiation in human and mouse embryonic stem cells (16). In hepatocellular carcinoma, LncTCF7 promotes the self-renewal of cancer stem cells (CSCs) by activating Wnt/β-catenin signaling via recruiting the SWI/SNF (switch/sucrose non-fermenting) histone modifier to TCF7 promoter (17), which is functionally similar to the action of LncGata6 in transactivating EHF in Lgr5+ ISCs. Due to lncRNAs’ versatile mode of gene regulation and their implication in the epigenetic modification, it is highly plausible that LncGata6-mediated recruitment of the NURF complex to the target promoters might transactivate other vital genes in addition to EHF. Thus, it is necessary to unveil the genome-wide impacts of LncGata6 on the NURF-associated epigenetic gene regulation. Moreover, authors showed that EHF mediates LncGata6-activated Wnt/β-catenin signaling. Intriguingly, LncGata6 also regulates the expression of ISCs-associated transcriptional factors including Myb, Fosb, and Sox9. Thus, it remains possible that LncGata6-controlled ISCs might also be due to the systemic changes in the transcriptional landscape rather than EHF upregulation per se, which should be addressed in future studies.

Abnormal expression of lncRNA is associated with cancer (4). In CRC, lncRNA contributes to therapeutic resistance and malignancy (5). Zhu et al. revealed that LncGata6 is implicated in the development of CRC. The authors found that LncGata6 is highly expressed in CRC patients. Moreover, the loss of LncGata6 inhibits CRC development in the ApcMIN CRC GEM model and patient-derived xenograft (PDX). These results suggest that LncGata6 also functions as a positive regulator of Wnt/β-catenin signaling in CRC. Similar to the mechanism of LncGata6-activated Wnt signaling in the ISCs, LncGata6 hyperactivates Wnt/β-catenin signaling through the NURF complex in CRC. The NURF complex is implicated in the intestinal tumorigenesis via SMARCA1 (18). The NURF complex is composed of bromodomain PHD finger transcription factor (BPTF), SNF2L, ATPase subunit, and pRBAP46/48 (19). Zhu et al. showed that LncGata6 binds to BPTF of the NURF complex and transactivates EHF. EHF is highly expressed in human cancers including CRC, lung cancer, and liver cancer (20). However, how EHF is upregulated in cancer was unknown. Thus, LncGata6-mediated transcriptional activation of EHF might explain the upregulation of EHF in human cancer in general. BPTF induces the epithelial-mesenchymal transition (EMT) (21) and enhances the transcription activity of MYC in CRC (22). Given that the NURF complex upregulates Wnt/β-catenin signaling (23), it is likely that LncGata6 might also contribute to EMT and MYC-activated transcriptional network via the NURF complex. Future studies may address how LncGata6 contributes to CRC metastasis.

Given the crucial roles of LncGata6 in intestinal homeostasis and regeneration, a pre-clinical test should carefully examine the side effects and consider the specific and efficient delivery methods of LncGata6 targeting reagents to CRC. Despite the co-expression of LncGata6 with Lgr5, defining CSCs by LncGata6 expression may require additional evidence. Furthermore, it is unknown how LncGata6 is upregulated in CRC. Nonetheless, considering the impacts of CSCs on therapeutic resistance and metastasis, a study of LncGata6 in CRC therapeutic resistance and metastasis might be interesting. Additionally, expression of LncGata6 and EHF might serve as biomarkers for CRC patients for treatment with LncGata6 molecular targeting. Together, Zhu et al. unveiled how lncRNA governs cell stemness in both physiologic and pathologic conditions and further proposed molecular targeting of lncRNA as a viable option for CRC treatment.

Conflicts of Interest: All authors have completed the ICMJE uniform disclosure form (available at http://dx.doi.org/10.21037/ncri.2019.01.02). The authors have no conflicts of interest to declare.