While EGFR-mediated signaling is required for normal cellular function, the activity of EGFR is frequently dysregulated in cancer through various mechanisms, such as overexpression, mutation and deletion. For instance, more than 50% of the studied cancer types, including bladder, ovarian, breast and colorectal cancer, are associated with increased expression of EGFR (5); early retrospective analyses showed EGFR overexpression in 62% of non-small cell lung cancer (NSCLC) cases, which is associated with poor prognosis (6). Overexpression of EGFR increases cell exposure to the related ligands, such as epidermal growth factor (EGF) and transforming growth factor-α (TGF-α), and subsequently upregulates cellular activities. Activating mutations in the EGFR gene, such as deletions in exon 19 and mutation L858R in exon 21, can destabilize the auto-inhibited conformation of EGFR through steric alterations, leading to constitutively active signaling cascades even in the absence of the ligands (7). Tumors with increased EGFR activity can often benefit from treatment with EGFR-tyrosine kinase inhibitors (TKIs).

Indeed, EGFR-TKIs have been used as a standard treatment in the clinic for patients carrying mutant EGFR in many types of cancer. The first generation TKIs such as gefitinib (8) and erlotinib (9) can bind the kinase domain and compete with ATPs, thus inhibiting phosphorylation of the kinase domain. However, approximately 50% of the patients may develop resistance to the first generation TKIs after treatment, due to selection of clones with secondary mutation T790M (10). It was proposed that the T790M mutation on the kinase domain increases the affinity to ATPs, making ATPs one order of magnitude more competitive to the reversible TKIs (11). Thus, new generations of TKIs have been developed to tackle this type of resistance. Nevertheless, the first generation of TKIs still plays a major role in treatment of cancer with active EGFR.

Hence, predictive biomarkers such as activating mutations, especially in exons 18–21 of EGFR or EGFR amplification, are critical to identify patients suitable for TKIs, and testing for these mutations and tailoring therapy have been accepted as standard clinical practice for various types of cancer. However, although there is evidence that head and neck squamous-cell carcinoma (HNSCC) can be dependent on EGFR signaling, these markers do not seem to show any benefit for oral squamous-cell carcinoma (OSCC), a subgroup of HNSCC. However, Tan et al. identified two of OSCC patients who showed dramatic responses to gefitinib (12). Further characterization revealed a synonymous homozygous single-nucleotide variant (or single nucleotide polymorphism, SNP) at position 2361 of the coding region (rs10251977; 2361G>A) in EGFR exon 20 (13). In A/A or G/A genotype, the level of a long non-coding RNA (lncRNA), called EGFR-AS1, is decreased, whereas EGFR isoform D/A ratio is increased as compared to G/G genotype (Figure 1). A consequence of these changes is increased sensitivity to TKIs such as gefitinib. 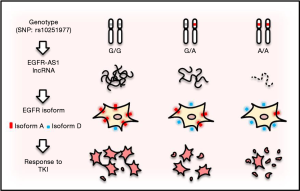 In this recent paper (13), the authors used primary cell culture derived from the patients, and demonstrated that the heterozygous SNP (G/A) is more resistant to TKIs than the homozygous A/A counterpart, and the homozygous wild type (G/G) cells such as NCC-HN1 showed the highest resistance among them. Moreover, the cells with G/G genotype revealed a higher level of phosphorylated EGFR, AKT, ERK and ribosomal protein S6 (S6) than the cells with A/A genotype in response to gefitinib and erlotinib, respectively, suggesting that SNP G>A may impact the TKI response through these pathways. The function of this alteration (G>A) was elegantly demonstrated by knockin of G/A in the G/G background of NCC-HN1 cells. For instance, the edited G/AAAV cells were more sensitive to gefitinib with a lower level of phosphorylation of these target proteins than the G/GAAV cells. Experiments with siRNA or LNA antisense oligonucleotides further support the role of G/A in response to TKIs in OSCC. These results provide evidence that a synonymous SNP is functional, and can serve as a driving force for increased sensitivity to TKIs and phosphorylation of EGFR, AKT, ERK and S6. Of interest, this sensitivity is specific to inhibitors targeting the kinase domain such as gefitinib, erlotinib, afatinib, dacomitinib, lapatinib, but has not been seen with monoclonal antibodies against the extracellular domain of EGFR, such as cetuximab, suggesting that a unique mechanism is involved.

Now a question is how a silent (synonymous) SNP that does not change amino acid sequence (EGFR-Q787Q) would cause a better clinical outcome. Since the alteration also involves lncRNA EGFR-AS1, which is transcribed from the same region but in an opposite direction (Figure 2A), it would not be surprised that this SNP may impact expression of EGFR-AS1. Indeed, quantitative RT-PCR assays indicated that a lower EGFR-AS1 level is associated with this SNP and these cells are more sensitive to TKIs. This downregulation of EGFR-AS1 in the A/A genotype cells is due to its decreased stability. Moreover, the function of EGFR-AS1 regulating TKI resistance was further validated by knockdown using small interfering RNA (siRNA), sensitizing the previously resistant cell line (G/G) to TKIs. 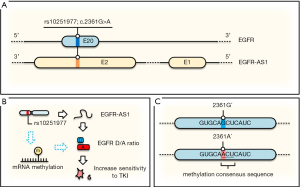 Figure 2 A possible mechanism for 2361G>A-mediated increase EGFR D/A. (A) 2361G>A SNP is located at exon 20 of EGRF and exon 2 of EGFR-AS1 in an opposite orientation; (B) an additional mechanism might exist, i.e., 2361G>A may enhance EGFR mRNA methylation, leading to increased level of EGFR isoform D; (C) a methylation consensus sequence (ACU) is generated by 2361G>A. *, in the latest version of EGFR sequence (NM_005228.4) it should be G2618>A. EGFR, epidermal growth factor receptor; SNP, single nucleotide polymorphism.

Mechanistically, the same approaches (knockdown of EGFR-AS1 by siRNA or LNA oligo, AAV-mediated generation of G/A genotype) revealed the upregulation of EGFR isoform D/A ratio. For instance, this ratio was particularly higher in the sensitive cell lines (A/A or G/A) than in the resistant line (G/G). EGFR isoform D has been previously shown to be associated with increased sensitivity to TKIs (14) although the underlying mechanism is not fully understood. The effect of EGFR isoform D on TKI sensitivity was demonstrated by knockdown of isoform D, but not isoform A, resulting in gain of resistance to TKI in previously sensitive line (A/A). Finally, this correlation between this SNP (G/G vs. A/A) and clinical response was further confirmed in a cohort of additional 8 patients (6 AAs vs. 2 GGs), highlighting the significance of these findings.

It appears clear that G2361A-mediated increased level of EGFR isoform D is responsible for the increased sensitivity to TKIs, and EGFR-AS1 may contribute to the formation of EGFR isoform D as the authors proposed. The role of lncRNAs in gene splicing has been well documented in the literature and a well-known example is MALAT1 that can interact with splicing factors and influence their distribution in nuclear speckle domains, leading to different splicing patterns (15). Furthermore, lncRNAs can also regulate gene splicing through their encoded short peptides. For example, a short peptide derived from lncRNA HOXB-AS3 can interact with heterogeneous ribonucleoprotein A1 (hnRNP A1) and promote the expression of isoform I of pyruvate kinase (PKM1) (16). If EGFR-AS1 is involved in regulation of EGFR isoform D, it is likely that EGFR-AS1 serves a negative regulator because in the A/A genotype cells, EGFR isoform D is increased with a decreased level of EGFR-AS1.

In this regard, we would like to propose an additional possibility that A/A genotype may lead to upregulation of EGFR isoform D (Figure 2B,C). Although it is well known that DNA methylation plays a critical role in gene expression, accumulating evidence indicates that RNA can also be reversibly methylated. Many studies support the role of RNA methylation in the post-transcriptional regulation of gene expression. RNA methylation on the A base (m6A) is the most abundant posttranscriptional modification of mammalian mRNA. We note that when G/G is changed to A/A in this case, GCU becomes ACU (Figure 2C) that matches perfectly with the consensus RNA methylation sequence (17). Apparently, RNA methylation (m6A) can change structure of mRNAs that can lead to different RNA-protein interactions. For instance, MALAT1 methylation can enhance its interaction with splicing factors such as heterogeneous nuclear ribonucleoprotein C (hnRNP C). Thus, RNA methylation has been shown to efficiently interact with the target RNAs, and affect alternative splicing and abundance of multiple target mRNAs (18). Of course, other possible functions of m6A of EGFR regarding rs10251977 cannot be ruled out even if it is indeed proven that this SNP enhances EGFR methylation.

In summary, the study by Tan et al. provides an excellent example that a synonymous SNP can alter EGFR addiction, where lncRNA EGFR-AS1 and EGFR isoform D are important players in this pathway. Future work should focus on how to incorporate these findings into the biomarker discovery pathway and to better understand how SNP, lncRNA and EGFR isoforms interact to impact clinical outcomes.

Conflicts of Interest: All authors have completed the ICMJE uniform disclosure form (available at http://dx.doi.org/10.21037/ncri.2018.01.03). The authors have no conflicts of interest to declare.