The advent of next-generation sequencing has revealed that the majority of expressed transcripts do not encode proteins (1). Many of them belong to a large and growing family of long noncoding RNAs (lncRNAs), generally defined as transcripts larger than 200 nucleotides, typically transcribed by RNA polymerase II, spliced, and polyadenylated, but not translated into protein (2). Mounting evidence indicates that lncRNAs are vital components of gene regulation programs in a range of physiological and pathological processes, including the immune response, neuronal function, cardiovascular disease, and cancer (3-6). By interacting with molecular partners such as DNA, RNA, and protein, lncRNAs form scaffolds, guides, double-stranded nucleic acids, or decoys that influence molecular partners and thereby affect specific gene regulatory processes such as transcription, RNA turnover and transport, mRNA translation, and protein stability (7,8). Among this diverse family, several lncRNAs have been reported to be dysregulated in cancer. For example, lncRNAs MALAT1 and HOTAIR function as oncogenes, promoting cell growth and metastasis, whereas lncRNAs GAS5 and MEG3 function as tumor suppressors, inhibiting the proliferation of cancer cells (3,9).

Many RNA-binding proteins (RBPs) have been identified as forming lncRNA-RBP (lncRNP) complexes that enable lncRNA functions at the cellular and organismal levels. Among them, the RBP HuR [also known as embryonic lethal abnormal vision-like 1 (ELAVL1)], binds many lncRNAs and modulates lncRNA actions (10-12). HuR is abundant and ubiquitously expressed in different cell types, participating in diverse cellular functions including proliferation, differentiation, senescence, and the stress response (13,14). Accordingly, HuR has been implicated in controlling myogenesis, immunological responses, integrity of the gastrointestinal tract, and cancer (14-17). HuR was found highly expressed in a wide range of cancers, had a pro-oncogenic impact, and implemented a pro-cancer gene expression program (18). Until recently, this pro-cancer program was believed to be orchestrated through the impact of HuR on target mRNAs, typically by stabilizing and modulating their translation rates (8); in turn, the encoded proteins promoted cell proliferation, angiogenesis and metastasis, and facilitated cancer cell escape from senescence and immune surveillance (14). However, two recent articles have uncovered two HuR target lncRNAs through which HuR represses, in complementary ways, one of the most important cancer pathways: the p53 tumor suppressor program.

TP53 (‘tumor protein p53’) is one of the most frequently mutated genes in cancer. It encodes p53, a transcription factor that has a strong tumor suppressor function. By binding to p53-response elements on regulatory regions of target genes, p53 transcriptionally induces the production of proteins that reduce cell proliferation, trigger apoptosis, and mount the DNA damage response. Besides transcribing coding genes, p53 also induces the transcription of noncoding RNA, including several lncRNAs that participate in the p53 network and thus control cancer progression (19). For example, p53 was shown to induce transcriptionally lincRNA-p21 in response to DNA damage, and lincRNA-p21 in turn bound p53 as co-activator to enhance p53 transcription (20). Similarly, lincRNA-p21 bound hnRNPK as co-activator to implement a transcriptional repression program that is also a hallmark of p53 and includes shutting off the production of anti-apoptotic and proliferative proteins (21). As reviewed recently (19), another p53-induced lncRNA, PINT, bound the Polycomb repressive complex 2 (PRC2) and enabled PRC2 targeting of specific genes for H3K27 tri-methylation and repression. Following transcriptional activation by p53, lncRNA DINO was found to associate with and stabilize p53, establishing a positive feedback loop that further enhanced p53 function. LncRNA PANDA was transcriptionally activated by p53 from the CDKN1A (p21) locus and bound nuclear transcription factor NF-YA, blocking its function and thereby suppressing apoptosis; however, it also was found to bind and stabilize p53, creating another positive feedback loop. Other lncRNAs that are p53 targets, including PR-lncRNA1, PR-LncRNA10, TUG1, Linc-Ror, and PVT1 were found to affect other cancer traits, as reviewed recently (19).

In a recent issue of Cell Reports, Li et al. (22) identified and functionally characterized the p53-regulated lncRNA PURPL in colorectal cancer. PURPL was strongly induced by DNA damage and was predominant in nuclear. Knockout of PURPL by CRISPR-Cas9 in colon cancer cells reduced survival and accelerated apoptosis. Interestingly, microarray analysis of genes differentially expressed in PURPL WT and PURPL KO cells revealed that many p53 target mRNAs were elevated after ablating PURPL, suggesting that PURPL repressed p53. In addition, loss of PURPL increased p53 stability and steady-state levels in colon cancer cells, but only in cells harboring WT p53 (not mutant p53). These findings are particularly relevant considering current anti-cancer efforts aimed at activating p53; for example, ongoing clinical trials employ inhibitors of MDM2 (a protein that triggers p53 ubiquitination and proteolysis) to promote p53 signaling in the absence of DNA damage, and block cancer progression. Li et al. found that loss of PURPL strongly upregulated p53 abundance and dramatically impaired tumor cell growth in vitro and in vivo, collectively indicating that PURPL promoted survival signaling by controlling p53 levels. In this regard, the negative feedback control of p53 levels exerted by MDM2 was recapitulated by lncRNAs such as linc-RoR and as explained below, also by PURPL.

By RNA pulldown and mass spectrometry, Li et al. (22) found strong interaction between PURPL and MYBBP1A, a protein that stabilizes p53. In light of the authors’ result that loss of PURPL increased p53 levels, they proposed that loss of PURPL freed up MYBBP1A, enabling it to bind and increase p53 stability. Interestingly, MYBBP1A is not a canonical RBP and did not bind PURPL; therefore, the authors examined other PURPL-binding proteins from their mass spectrometry survey and identified HuR as a PURPL-interacting RBP. Moreover, they found that MYBBP1A bound PURPL through the adaptor protein HuR, supporting the notion that multiprotein complexes interacting with a lncRNA critically influence its biological function. This paradigm further underscored the notion that a lncRNA can serve as a platform to support the physical interaction of different proteins to elicit a biological outcome. Importantly, in the presence of PURPL, the interaction of HuR with MYBBP1A prevented MYBBP1A from binding to and stabilizing p53, thereby suppressing p53 function.

As mentioned above, HuR was found to bind and regulate the function of several cancer-associated lncRNAs, including OIP5-AS1, MALAT1, and HOTAIR. However, HuR binding to lincRNA-p21 is particularly relevant to the regulatory paradigm described for PURPL. As shown by Yoon et al. (10), the interaction of HuR with lincRNA-p21 led to the recruitment of the microRNA let-7 and associated RISC (RNA-induced silencing complex) to lincRNA-p21, resulting in lincRNA-p21 decay; in turn, the HuR-mediated loss of lincRNA-p21 rescued the translational repression of mRNAs partially complementary with lincRNA-p21 (e.g., JUNB and CTNNB1 mRNAs) (10). Importantly, however, the degradation of lincRNA-p21 also precludes its function as cofactor of hnRNPK. Thus, in the absence of lincRNA-p21, hnRNPK is no longer capable of suppressing the transcription of anti-apoptotic and proliferative genes, while the transcription of some p53-induced genes is impaired (20,21), and thus a pro-survival, proliferative phenotype ensues.

To summarize, HuR can suppress p53 function in two complementary ways, both involving HuR lncRNPs. By binding to and degrading cytosolic lincRNA-p21, HuR can impair the transcriptional program of p53 (including the transcriptional repression program carried out by hnRNPK) (10,20,21). By binding to the nuclear lncRNA PURPL, HuR mediates a loss in p53 levels via a reduction in p53 stability. The joint control of p53 levels and function by lncRNPs is depicted in the presence and absence of HuR (Figure 1). 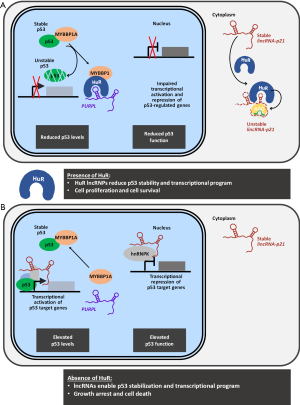 Figure 1 HuR lncRNPs suppress p53 function at complementary levels. (A) In the presence of HuR cytoplasm, cytoplasmic HuR-lincRNA-p21 complexes result in rapid degradation of lincRNA-p21 via let-7/RISC. Accordingly, neither the transcriptional repressor complex hnRNPK-lincRNA-p21 nor the transcriptional activator complex p53-lincRNA-p21 forms and the p53 transcriptional program is suppressed. At the same time, HuR-PURPL recruits and sequesters MYBBP1A, resulting in a loss in p53 levels via a reduction in p53 stability. Together, HuR lncRNPs both suppress the transcriptional function of p53 and lower p53 abundance in cells; (B) in the absence of HuR, a stable lincRNA-p21 enables the p53-driven transcriptional activation and repression, while PURPL lacks the factor that sequesters MYBBP1A, allowing it to bind and stabilize p53. Accordingly, reduction or inhibition of HuR can activate p53 signaling by both stabilizing p53 and enhancing the p53-governed transcriptional program. PURPL, p53 upregulated regulator of p53 levels; MYBBP1A, MYB-Binding Protein 1a; p53, 53-kDa protein; HuR, human antigen R; LincRNA-p21, long intergenic noncoding RNA p21.

In closing, we still need far greater knowledge of the abundance of PURPL, lincRNA-p21, and the complexes they form with HuR in cancer and non-cancer tissues. However, the studies by Yoon (10) and Li (22) discussed here bring into focus HuR as an RBP that can jointly suppress p53 function and reduce p53 levels. With escalating interest in developing therapies that raise p53 activity, particularly in combination with DNA-damaging treatments, new lines of effort could be devised based on these findings. For example, new strategies could be created to lower HuR levels or function using small chemical inhibitors (some of which have already been reported in vitro) (23,24). Other approaches could seek to reduce PURPL levels using antisense oligomers or other sequence-specific inhibitors. Yet other interventions could be devised to block the interaction of HuR with these lncRNAs, for instance by employing ‘decoy’ RNAs that block the RNA-binding function of HuR or ‘masking’ oligomers that create regions of partial complementarity on lincRNA-p21 and PURPL that render them refractory to HuR binding. As it is often the case, it might be even more promising to devise these approaches in a multi-pronged fashion: eliciting DNA damage while enhancing the p53 response by jointly suppressing HuR function and its association with lncRNAs that thwart p53 signaling.

Conflicts of Interest: Both authors have completed the ICMJE uniform disclosure form (available at http://dx.doi.org/10.21037/ncri.2018.01.01). The authors have no conflicts of interest to declare.