Myogenic fate determination refers to the process of stem cell commitment towards skeletal muscle progenitor cells which, in turn, promote growth and repair of skeletal muscles. This process is orchestratedly mediated by the synchronized expression and repression of key transcription factors, gene products and various proteins. Approximately 24–48 hours following muscle injury, the muscular stem cells known as satellite cells (SCs) will become activated. This activation results in either the repair of damaged tissues via the generation of muscular progenitor cells (1), or the expansion of SCs which maintains the SC reserve pool. SCs will accomplish this in one of two ways, either by asymmetrical division, which results in one SC and one muscular progenitor cell, or symmetrical division which will result in either the generation of two SCs or two committed progenitor cells. Understanding the mechanisms that control activation and division of muscle SCs is thus crucial to the field of cell-mediated skeletal muscle repair. It has been suggested that long noncoding RNAs (lncRNAs) can mediate the cell fate decision upon SC activation, resulting in either an increase or a reduction in the rate of muscle regeneration (2). LncRNAs include several types of RNA products that can regulate and coordinate gene expression through epigenetic mechanisms. Here, we will review what is known about regulation of myogenic fate determination by lncRNAs.

The RNA family is much larger and more complex than scientists could have ever imagined upon their initial discovery. Amongst the least understood are the class of lncRNAs thought to function as genetic modifiers rather than protein encoding machinery. It has been estimated that only 2% of the genome actually encodes proteins, this mean that the vast majority of the transcriptome encodes lncRNAs (3). Implications for the various classes of lncRNAs are widespread and scientists have only just begun to scratch the surface of their potential functions. LncRNAs have been demonstrated to function in diverse ways, including as base-pairing partners, protein ligands, and enzymes (4). This review will focus on the lncRNAs currently under investigation, which are ill-understood compared to microRNAs (miRNAs).

LncRNAs localize in both the nucleus and the cytoplasm to regulate gene expression post-transcriptionally or through chromatin remodeling (5). LncRNAs are noncoding RNAs longer than 200 nucleotides in sequence (6) (as opposed to miRNAs which are roughly 21–25 nucleotides in length), they encompass the largest and most diverse group of ncRNAs.

The biogenesis of lncRNAs is not as well understood as that of the miRNAs. At its core, the process is quite similar to that of miRNAs, in that RNase II polymerase is involved in the initial transcription and splicing must occur for processing into the mature form. The main distinction between the two processes lies in the absence of the open reading frame in lncRNAs. In addition to this, lncRNAs appear to be regulated in large groups, wherein the knockdown of Dicer results in the reduced expression of hundreds of lncRNAs (7). LncRNAs are often processed like mRNAs, where polyadenylation adds a poly(A) tail to the 3' end of the transcript. A 5' cap is also added to the immature transcript, allowing for generation of the mature lncRNA structure. In some cases, however, lncRNAs lack the poly(A) tail, and instead are processed as described above in the miRNA section (7).

There are a number of subclasses of lncRNAs, including circular RNAs, small nucleolar RNAs, and lncRNAs which contain a miRNA, are examples (7). LncRNAs can be classified as overlapping, divergent (or bidirectional), intronic, intergenic, sense, or antisense. The bidirectionality of certain lncRNAs is an important distinction which sets it apart from most other RNA classes (8).

SCs are quiescent under resting conditions; they become activated upon insult and proceed to generate committed progenitor cells as noted above. Expression of Pax3 and/or Pax7 is crucial for maintenance of the SC reserve pool, both also play vital roles in regulating Myf5 and MyoD (9).

The Myf5 and MyoD genes are responsible for myogenic determination, and expression of Myf5 is indicative of commitment to a myogenic cell fate (10). Pax7 in SCs is also responsible for activation of MyoD, which is a skeletal muscle transcription factor, however its mRNA transcript does not undergo translation. The same is true for mRNA transcripts of Myf5 (11). It is important to note that in mammalian cells, proliferation must stop before the cell can enter the G0 phase of the cell cycle. The G0 phase occurs directly before, or concurrently with differentiation. To summarize the process of SC fate specification: Pax3 and Pax7 function to maintain the undifferentiated SC pool, MyoD and Myf5 function as primary myogenic regulatory factors (MRF) to promote myoblast differentiation, and myogenin and MRF4 act as secondary MRFs in terminal cell differentiation (12). 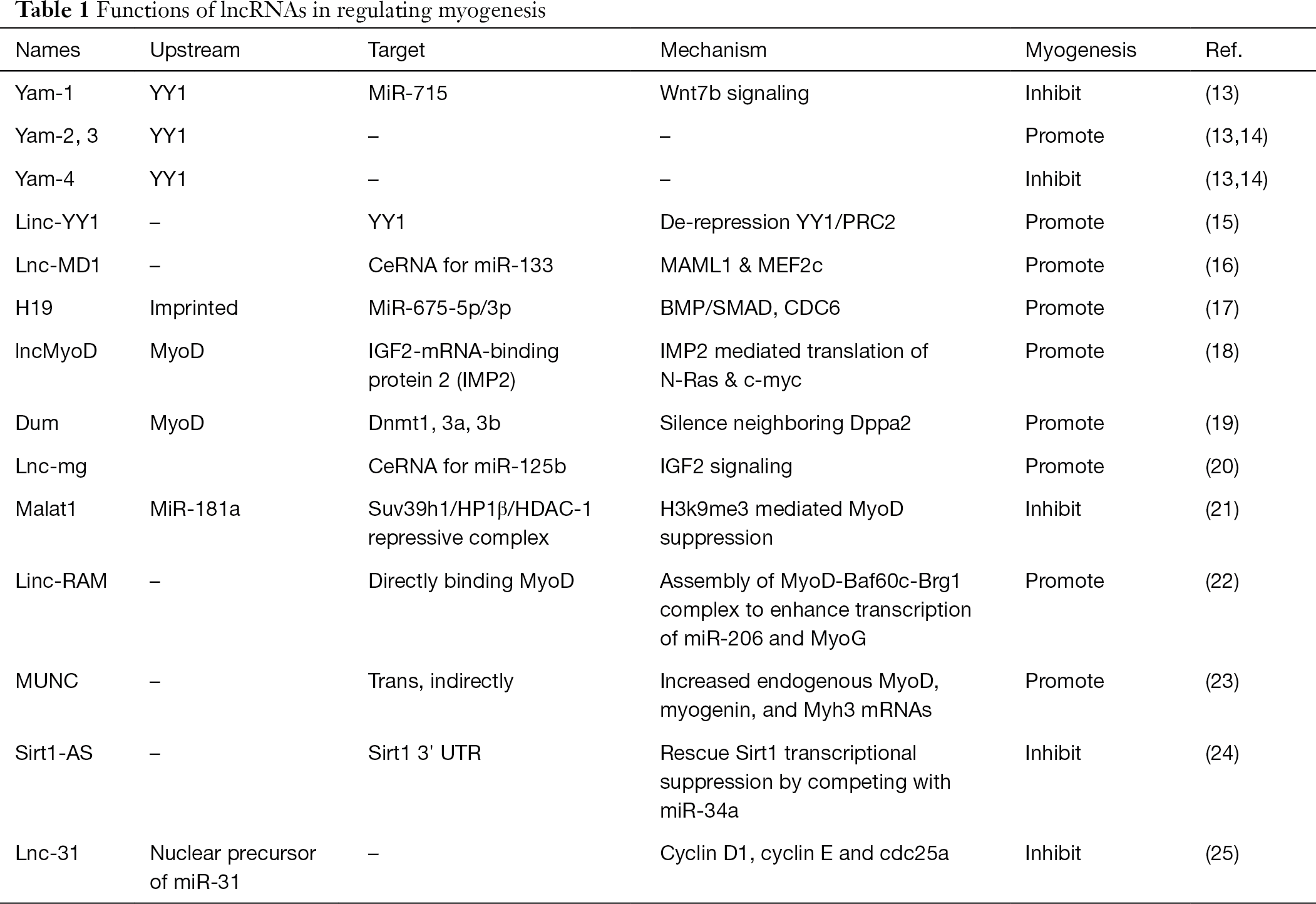 LncRNAs have recently emerged as potent regulators of myogenesis; many of these lncRNAs act through miRNA regulation. Circular RNAs (cirRNAs) for example, function as miRNA “sponges”; and their unique structures enable long-term regulation of miRNAs (11). One mechanism lncRNAs use to counter miRNA actions is to competitively bind to miRNA targets (3). Another regulatory method is to restrict expression of the target miRNA. The YY1-associated lncRNA Yam-1 acts to reduce the expression of a number of the myomiRs during myoblast proliferation. Through activation of miR-715, Yam-1 induces myogenic repression via the Wnt7b pathway (13). There are multiple forms of Yam lncRNAs, Yam-1 and -4 appear to inhibit muscle differentiation, while Yam-2 and -3 appear to promote differentiation (13,14). Additionally, linc-YY1 also has been shown to promote differentiation (15).

Linc-MD1 promotes skeletal muscle differentiation via inhibition of miR-133, which acts to prevent terminal differentiation (16). In other studies, linc-MD1 was shown to generate miR-133, or to function as a miR-133 target (26). A common target of lncRNA is the MRF MyoD. Interestingly, MyoD facilitates its own de-repression via lncRNA H19. Encoded within H19 are miRNA 675-3p and -5p, which both have roles in myogenic differentiation (17). H19 has also shown activity in regulating Let-7 (27). LncMyoD is a downstream target of MyoD, this lncRNA regulates cell-cycle exit and has an important role in myogenesis (18). MyoD induces the lncRNA Dum following myoblast differentiation, and it has been known to be a pro-myogenic factor in muscle regeneration (19).

Much has been learned regarding lncRNA in the past quarter century, from the discovery of lncRNA to the use of antisense for genetic knockdown. It is evident that the biology of lncRNAs is highly complex and regulates cell fate and differentiation via multiple mechanisms. It is likely however that we have only just begun to scratch the surface of how these molecules function and interact with each other. Future research is required to elucidate the mechanism through which these RNAs act on the various stages of myogenesis.