Non-alcoholic fatty liver disease (NAFLD) is characterized by aberrant and non-alcoholic lipid droplet deposition in hepatocytes. The worldwide prevalence of NAFLD is now increasingly rising among the general population. About 25% of the world population, including children, was estimated to have suffered NAFLD in 2018 (1). A minority of individuals with non-alcoholic steatohepatitis (NASH), one subtype of NAFLD, are prone to advance to degenerative fibrosis, irreversible cirrhosis, and even hepatocellular carcinoma (2). NAFLD-related socioeconomic burdens and health-related quality of life (HR-QOL)-associated issues significantly affect patients’ outcomes. However, the pathogenesis of NAFLD is heterogeneous and still not well elucidated (3).

Patients with NAFLD display a high concentration of circulating free fatty acid (FFA) levels (4). In addition, a high concentration of circulating FFA levels can cause a sequence of pathological processes varying from insulin resistance, diabetes, and ultimately even to hepatic steatosis (5,6). Therefore, cellular FFA overloading is commonly applied to mimic hepatic steatosis with in vitro experimental models (7,8). In this study, we utilized FFA-loaded HepG2 cells to construct an in vitro model of NAFLD and then investigated the potential underlying molecular mechanisms of NAFLD.

MicroRNAs (miRNAs, miRs) are a class of small endogenous noncoding RNAs that contain approximately 19–22 nucleotides, which negatively regulate their target genes by directly binding to the 3’untranslated region (3’UTR) of related mRNAs via complementary base pairing principle and extensively participating in various pathophysiological events in the liver (9-11). It has been reported that miR-122 is the most abundant miRNA in the normal human liver, and circulating miR-122, miR-192 and miR-375 were upregulated in benign steatohepatitis and even more dramatically increased in NASH (11). Additionally, silencing of miR-34a was found to restore the expression of SIRT1 and PPARα, leading to AMPK and HMGCR activation, finally ameliorating hepatic steatosis (12). In human NASH, palmitic acids-treated HepG2 cells, or in high fat diet (HFD)-fed mice, downregulation of miR-451 could inhibit fatty acid-induced effects through the regulation of AMPK/AKT pathway (13). These discoveries suggest that miRNAs play a pivotal role in NAFLD-associated pathogenesis.

miR-155 has been found to be increased in liver tissues from HFD-fed mice (14), indicating that differentially expressed miR-155 may be involved in the regulation of lipid metabolism. Notably, recent investigations revealed that miR-155 is a multifunctional miRNA, and plays pivotal roles in a variety of physiological and pathological biology processes, including haematopoiesis, inflammation, hematological and solid malignancies, and cardiovascular diseases (15-18). In addition, another study demonstrated that miR-155/LXRα axis played a protective role in NAFLD mice (19). Conditionally liver-specific overexpression of miR-155 ameliorated HFD-induced fatty liver in mice by targeting carboxylesterase 3/triacylglycerol hydrolase (Ces3/TGH) (20). Due to the relevance between miR155 and NAFLD, we set out to perform an in-depth analysis of miR-155 in HepG2 cells treated with FFA with the aim of finding a new target of miR-155 responsible for the pathogenesis of NAFLD.

We were subsequently able to demonstrate that miR-155 was upregulated in FFA-exposed HepG2 cells in vitro. Interestingly, in the absence of FFA exposure, inhibition of miR-155 was capable of promoting fatty acid accumulation in HepG2 cells; meanwhile, in the presence of FFA exposure, overexpression of miR-155 attenuated this accumulation in HepG2 cells. Further investigation revealed that CCAAT/enhancer binding protein β (C/EBPβ) was a target gene of miR-155, suggesting that targeting miR-155/C/EBPβ might represent an attractive strategy for preventing NAFLD.

Human liver hepatocellular carcinoma (HepG2) cells were purchased from the cell bank of The Chinese Academy of Sciences (Shanghai, China). Cells were maintained in high glucose-DMEM (Hyclone, Logan, UT, USA) supplemented with 10% fetal bovine serum (FBS) (Hyclone) and 1% penicillin/streptomycin. Cells were cultured at 37°C in an incubator supplied with 5% CO2.

For FFA treatment, 24 hrs after transfection, HepG2 cells were exposed to a mixture consisting of 1 mM oleate and palmitate at a molar ratio of 2:1 (Sigma-Aldrich, St. Louis, MO, USA) which was prepared in 1% bovine serum albumin (BSA)-containing medium (KeyGEN, Nanjing, China) for 24 hrs as previously described (14).

Forty-eight hours after treatment, HepG2 cells were collected. HepG2 cells were centrifuged at 166 g for 5 min, resuspended in 1 mL PBS and incubated with 0.75 µg/mL. Nile red dye was used for 15 min at room temperature. Intracellular lipid droplet content was analyzed by flow cytometer (Beckman, Miami, FL, USA) on the FL3 emission channel through a 585±21 nm band pass filter, following excitation with an argon ion laser source at 488 nm. Fluorescence intensity was quantified to calculate the percentage of events above the median value of fluorescence. The data was analyzed by FlowJo software (Treestar Inc, Ashland, OR, USA) and represented as the fold change (FC) comparing treatment groups to control groups.

HepG2 cells were seeded at a density of 1×106 per well in 12-well plates. After treatment, cells were harvested. Total RNA was isolated from HepG2 cells using TRIzol reagent (TaKaRa, Kusatsu, Japan). For the analysis of C/EBPβ mRNA, complementary DNA (cDNA) was reverse transcribed from total RNA by iScriptTM cDNA Synthesis Kit (Bio-Rad, Richmond, CA, USA). Subsequent amplification and examination were performed with SYBR Green (Takara) based on the ABI 7900HT Fast Real-Time PCR System (Bio-Rad). The primers of C/EBPβ and 18s are listed in Table 1. For the quantificative analysis of miR-155, the Bulge-LoopTM miRNA qPCR Primer Set (RiboBio) was applied to determine the expression of miR-155 with SYBR Green. qRT-PCRs were performed based on ABI 7900HT Fast Real-Time PCR System. The relative mRNA and miRNA expression levels were determined by the 2-ΔΔCt method. Housekeeping genes 18s and U6 were respectively used as the internal control for C/EBPβ mRNA and miR-155 expression analysis.

All statistical analyses were performed by SPSS version 22.0 software (IBM, Armonk, NY, USA). Unpaired, two-tailed Student’s t-test was used for two-group comparation. One-way ANOVA was used for comparing four groups followed by Bonferroni correction. A P value <0.05 was defined to be a statistically significant value. The data are presented as mean ± standard error of mean (SEM). 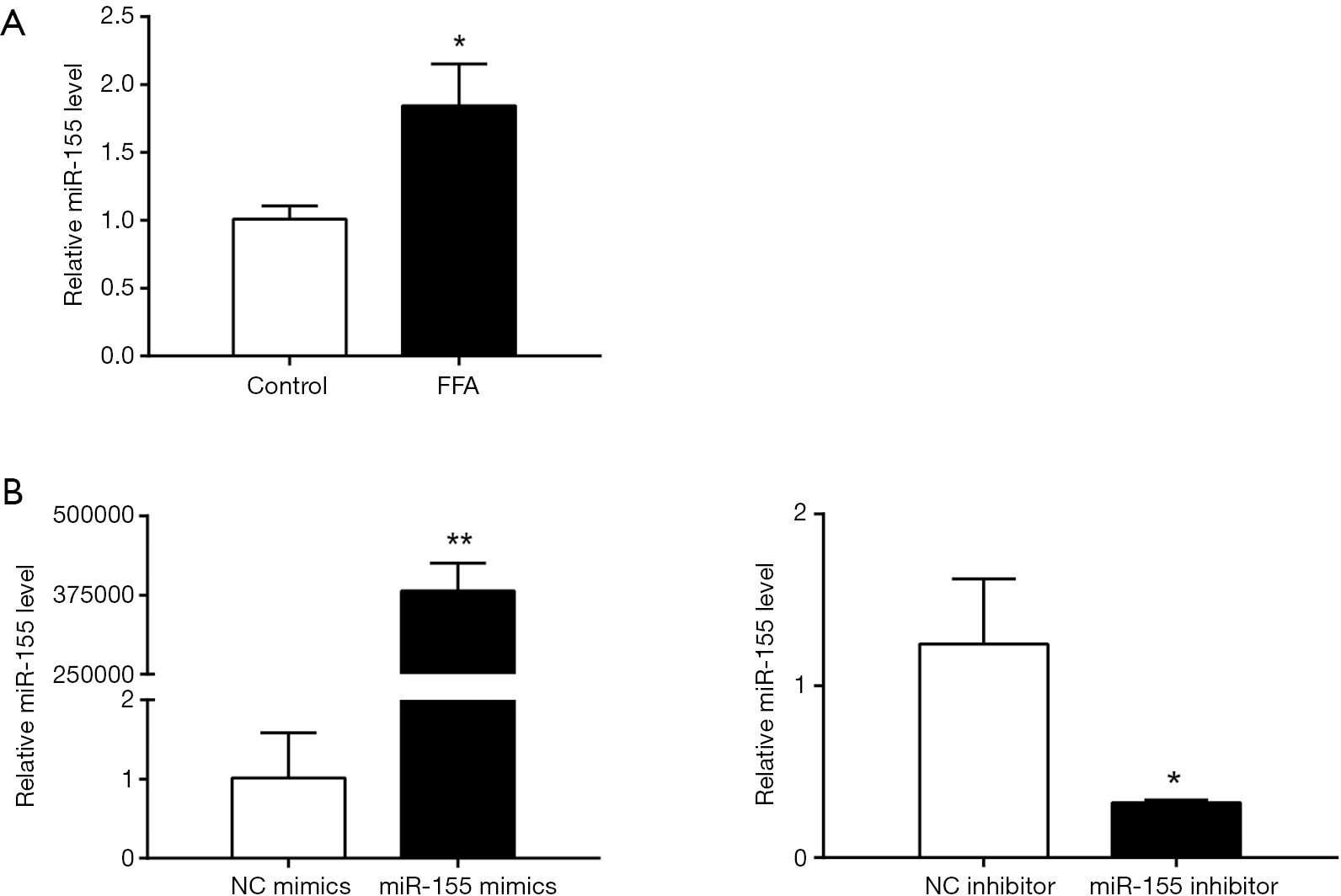 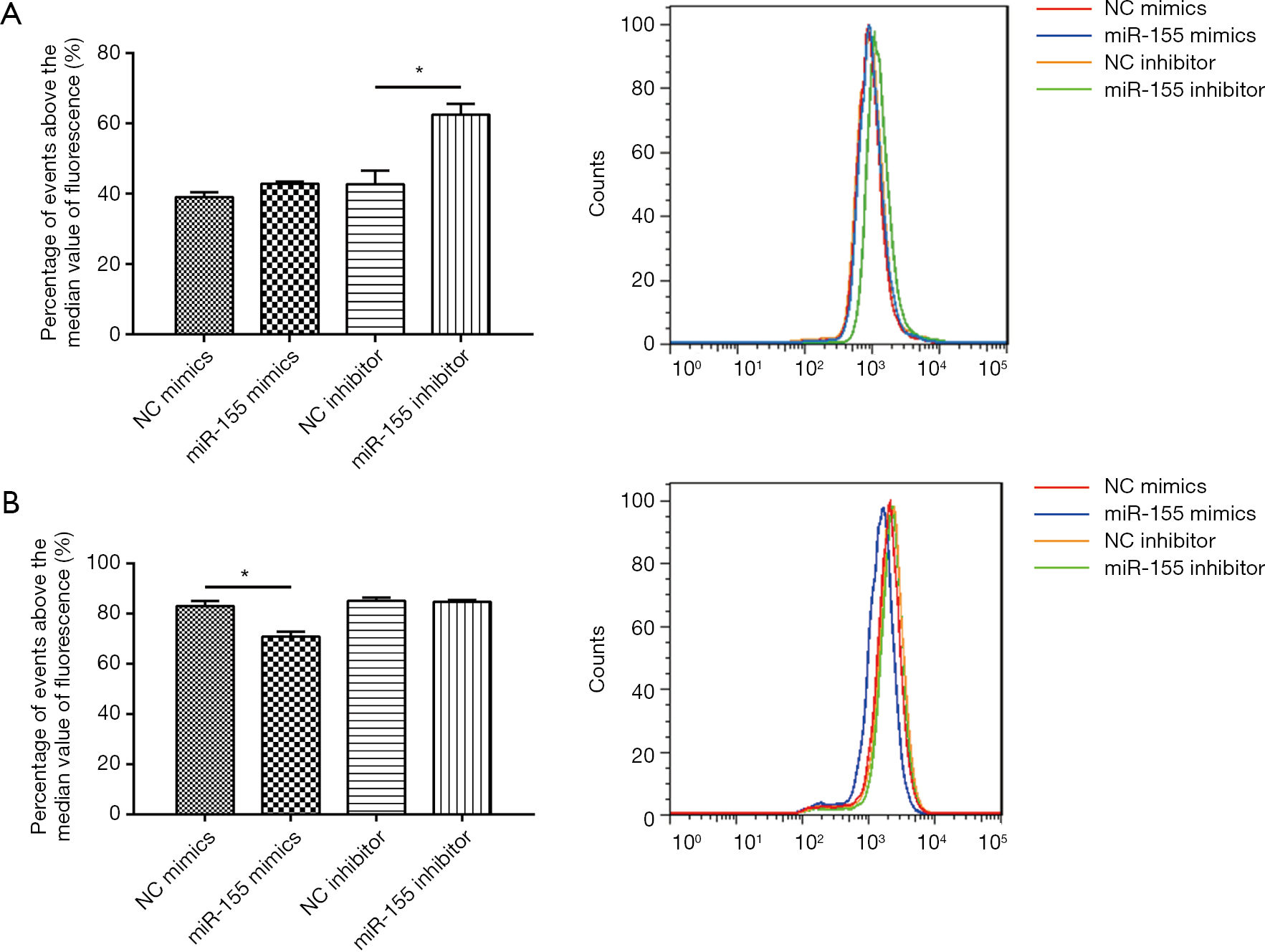 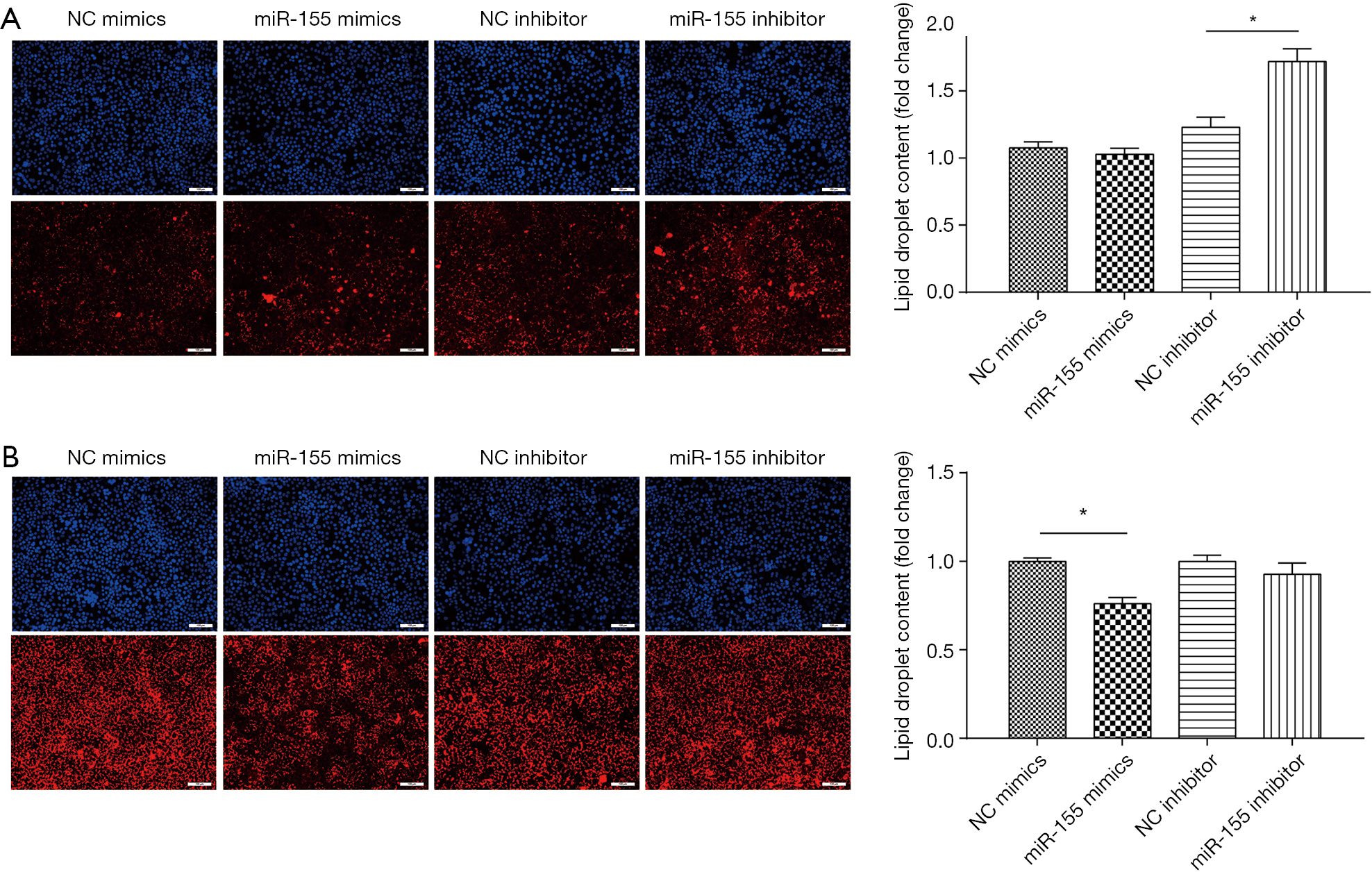 Figure 4 C/EBPβ expression in miR-155 mimic- or inhibitor-transfected HepG2 cells in the absence of FFA exposure at the protein level. (A) Blots for C/EBPβ (B) miR-155 mimics have the tendency to decrease C/EBPβ while miR-155 inhibitor can elevate C/EBPβ (n=3). *, P<0.05, versus the relative NC group. FFA, free fatty acid; NC, negative control. 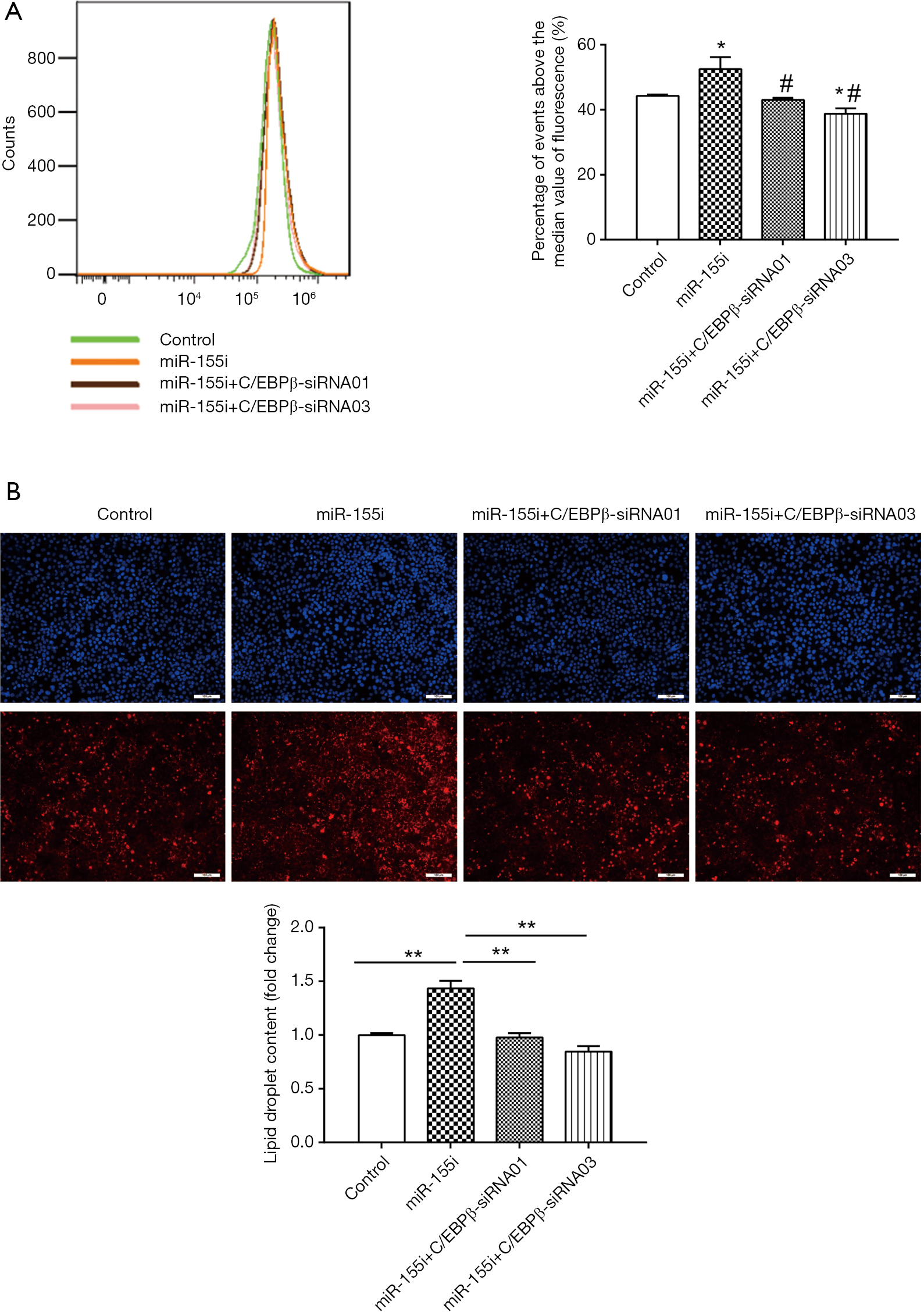 NAFLD is currently the most common liver disease in the world, but the pathogenesis of NAFLD is still unclear. As stated by the well-known double-hit theory, the first hit is the aberrant accumulation of triglycerides in hepatocytes, and the second hit is the oxidative stress and inflammatory mediators advancing hepatosteatosis to steatohepatitis, fibrosis, and even cirrhosis. However, recent findings have supported the multiple-hit hypothesis as being more powerful in explaining NAFLD pathogenesis. Multiple pathogenic factors, such as lipotoxicity, adipose tissue dysfunction, insulin resistance, oxidative stress, mitochondrial dysfunction, endoplasmic reticulum stress, altered innate immune regulation, and cytokine secretion, contribute to liver injury (21). Hallmarked by hepatic steatosis, which is a consequence of lipid acquisition surpassing lipid disposal, NAFLD is characterized by lipid homeostasis dysregulation. Little is known about its underlying molecular mechanisms. To date, there is no effective treatment for NAFLD. On account of this, there is an urgent need for these molecular mechanisms to be comprehensively elucidated, and for the corresponding NAFLD therapeutics to be innovated.

Currently, 38589 human miRNAs have been annotated (miRBase: http://www.mirbase.org/index.shtml, release 22.1, October 2018), and it is estimated that up to 60% of all human protein-coding genes might be direct targets of currently known miRNAs (22). The dysregulation of hepatic microRNAs has been commonly observed in NAFLD, and numerous dysregulated miRNAs are reported to be responsible for the development of NAFLD [e.g., miR-21 targets HMGCR to control triglyceride and cholesterol metabolism in NAFLD (23), miR-296 regulates FFA-induced lipoapoptosis by targeting PUMA in vitro (24), miR375 controls adipokines and inhibited inflammatory cytokines by directly targeting AdipoR2 in palmitic acid-induced HepG2 cells (25), and miR-149 targets FGF-21 to regulate NAFLD development] (26).

miR-155 has been reported to protect mice from the development of non-alcoholic hepatosteatosis by targeting LXRα (19). Circulating miR-155 decreases remarkably in NAFLD patients and could serve as a biomarker for NAFLD (27), indicating that miR-155 is closely related to NAFLD pathogenesis. However, the function of miR-155 in FFA-induced hepatic steatosis model of NAFLD in vitro has not yet been reported. Nile red is commonly utilized as an excellent stain for the investigation of physiological lipid droplet formation and pathological lipid overloading in cells (28,29). Thus, by using flow cytofluorometric analysis and fluorescence microscopy imaging, we investigated the effects of miR-155 in vitro based on FFA-exposed hepatic steatosis model. Our results demonstrated that overexpression of miR-155 is capable of attenuating lipid accumulation in HepG2 cells in the presence of FFA exposure, while inhibition of miR-155 is capable of promoting lipid accumulation in the absence of FFA exposure.

C/EBPβ is a member of the liver-enriched transcription factors C/EBPs family. The basic leucine zipper (bZIP) domain of C/EBPβ is highly conserved and primarily contributes to dimerization and DNA binding. Two members of the C/EBPs family, C/EBPα and C/EBPβ, are central governors of the integrative metabolic biological processes in the liver, such as gluconeogenic genes. Besides this, binding motifs of C/EBPs exist in many lipogenic gene promoters (30), suggesting that C/EBPβ might be a crucial mediator for lipid accumulation in the liver. C/EBPβ participates in forming LXRα-C/EBPβ complex which binds to the promoter of SREBP-1c. And the complex activates SREBP-1c transcription which ultimately activates genes encoding enzymes required for fat synthesis and lipid metabolism regulation in the liver (31). In palmitate-exposed HepG2 cells, knockdown of C/EBPβ alleviates lipid deposition and boosts lipolysis (32), indicating that C/EBPβ might be a crucial factor involved in lipid metabolism in the liver. Tumor necrosis factor α (TNFα) induces up-regulation of miR-155 and can significantly inhibit adipogenesis via targeting C/EBPβ (33). Herein, we report that the lipid droplet accumulation-inducing effect of miR-155 inhibitor can be reversed by interfering C/EBPβ in HepG2 cells. Thus, C/EBPβ is a target gene of miR-155 responsible for lipid accumulation in HepG2 cells.

Since the transcription factor C/EBPβ has been extensively reported to transcriptionally regulate key genes that control metabolic processes including lipogenesis and gluconeogenesis, finding molecules that are transcriptionally regulated by C/EBPβ or molecules that crosstalk with C/EBPβ and constructing a regulatory network of lipid accumulation would contribute to further in-depth mechanism study. Peroxisome proliferator-activated receptors (PPARs) are known as the master regulators of lipid metabolism, glucose metabolism, and energy homeostasis in the liver. The fact that CCAAT/enhancer-binding protein (C/EBP)-binding motifs exist adjacent to most PPARγ-binding sites highlights that PPARγ and C/EBPβ are likely part of a complex transcriptional network that regulates gene expression in a spatially coordinated manner (34). Fibroblast growth factor (FGF21), acting as an endocrine hormone, is secreted by the liver in response to peroxisome proliferator-activated receptor-α (PPARα) activation, exerting its metabolic effects mostly in the liver. PPARα/FGF21 signaling pathway has been recently reported to be a hepatic-specific mechanism in the pathogenesis of NAFLD (35). The intricate regulatory network between miR-155/C/EBPβ axis and some other closely related molecules including PPARγ or PPARα/FGF21 pathway needs to be precisely clarified.

Reliable and definite animal models are crucial for further investigation because in-vivo NAFLD models possess features resembling those of both the histopathology and pathophysiology of the stages and progression of NAFLD. Investigation into the function of miR-155/C/EBPβ in mouse NAFLD model is also urgently required. Distinct from the extensively used classic dietary models which mainly included high-fat diet, methionine-choline deficient diet (MCDD) and high-fructose (HF) diet, the western diet (WD) combined with carbon tetrachloride (CCl4) injections (WD/CCl4) has been recently noted for its inherent advantages in NAFLD pathogenesis (36). Thus, constructing a WD/CCL4 dietary model should be taken into account in the future research of relevant mechanisms, along with the ultimate goal of drug development.

Ethical Statement: All experiments and methods are performed strictly in accordance with the relevant guidelines of Wenzhou Medical University.