In general, microRNAs (miRNAs) control target gene expression by inhibiting translation and destroying target RNAs (1,2). However, interestingly some endogenous coding or noncoding RNAs have a function to sequester miRNAs from the real target RNAs by hybridization (called sponge function) without degradation and they are also known as competing endogenous RNAs (ceRNAs) (3,4). On the other hand, although miRNAs are usually stable, accumulating evidence suggests that endogenous transcripts or sometimes viral transcripts also control miRNAs by target RNA-directed miRNA degradation (TDMD) (5-7). In this degradation process, the complementarity between miRNA and target RNA is very critical (Figure 1) (7). miRNAs are quite stable in RNA-induced silencing complex (RISC) if the pairing with target RNA is partial (Figure 1A), although the extensive pairing with target RNA induces 3’ trimming, tailing and degradation of miRNA (Figure 1B). Therefore, some potential target RNAs of miRNAs are not simply targets of miRNAs but also control miRNA’s function and stability. Despite unclear significance in other systems and mechanisms of TDMD before, recent reports have demonstrated the strong evidence and mechanisms of TDMD. 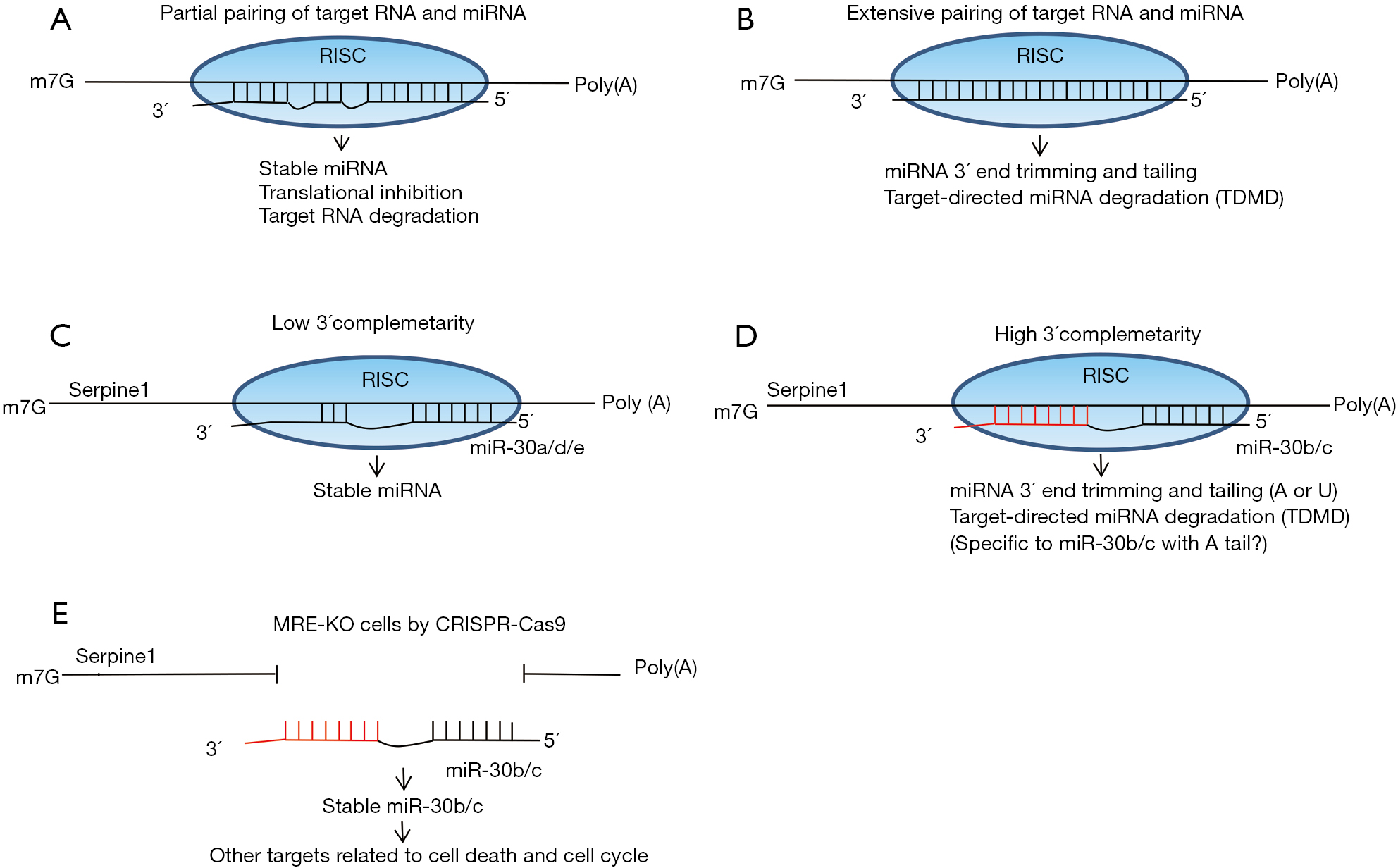 Figure 1 TDMD in general models and in miR-30/serpine1 RNA duplex. miRNAs control target gene expression by inhibiting translation and target RNA degradation. Endogenous or viral transcripts also control miRNAs by degradation through TDMD. miRNAs are stable in RISC if the pairing with target RNA is partial (A) although extensive pairing with target RNA induces 3’ trimming, tailing and degradation of miRNA (B). In the members of miR-30, miR-30b/c has higher 3’ complementarity to target site in Serpine1 3’UTR than miR-30a/d/e, and miR-30b/c is more sensitive to TDMD than miR-30a/d/e (C,D). miR-30b/c is more efficiently subjected to 3’ end trimming and tailing (A, adenylation; or U, uridylation) and degradation (D). miR-30b/c is more stable in MRE-KO cells compared to WT cells (E). A-forms (with A tail) of miR-30b/c is significantly decreased in MRE-KO cells, suggesting that A-forms of miR-30b/c may be efficiently subjected to TDMD. miR-30b/c escaped from TDMD in MRE-KO cells target other miR-30 target RNAs and affect the cell cycle and death. m7G, 7-methylguanosine capping at 5’ end of mRNA; poly (A), polyadenylation at 3’ end of mRNA. TDMD, target RNA-directed miRNA degradation; RISC, RNA-induced silencing complex. (Figures are representative and not very precise in some details.)

Ghini et al. reported more detailed mechanisms of TDMD of miR-30 family (8). The authors initially classified miRNA: target pairs (TargetScan 6.2) into three groups (high, mild and low) based on 3’ complementarity. Only 6% of pairs are categorized in the high group. Interestingly, in the members of miR-30, miR-30b and miR-30c (miR-30b/c) have higher 3’ complementarity to target site in Serpine1 3’UTR but miR-30a/d/e have the lower complementarity (Figure 1C,D). miR-30b/c is downregulated very fast in the serum depletion and re-fed experiments, indicating that miR-30b/c is more sensitive to TDMD than miR-30a/d/e. miR-30b/c is more efficiently subjected to 3’ end trimming and tailing (A, adenylation; or U, uridylation) and degradation (Figure 1D). The authors also suggested that TDMD is more effective at high ratios (>10) of target RNA over miRNA. Because the complementarity to target site in Serpine1 3’UTR is critical, the authors created cells with deletion of miRNA responsive element (MRE) in Serpine1 3’UTR [MRE-knockout (KO)] using the technique of CRISPR-Cas9 system (Figure 1E). miR-30b/c is more stable in MRE-KO cells compared to wild type (WT) cells. More interestingly, A-forms (with A tail) of miR-30b/c are significantly decreased in MRE-KO cells, suggesting that A-forms but not U-form of miR-30b/c are efficiently subjected to TDMD. As well as detailed mechanisms of TDMD, gene expression was compared between WT and MRE-KO cells. Apoptosis and cell cycle-related genes are enriched in differentially expressed genes between WT and MRE-KO cells and correlated with the cell phenotypes (cell death, cell cycle and proliferation). Those results suggest that miR-30b/c escaped from TDMD in MRE-KO cells target other miR-30 target RNAs (cell death and cycle-related genes) and affect the cell cycle and death.

A recent report showed that the 3’UTR of neuronal-regeneration-related protein (NREP) has near-perfect miR-29b site and destabilize miR-29b through 3’ trimming in brain that affects behavior of mice and Zebra fishes (9). In another report, a long noncoding RNA Cyrano hybridizes and triggers miR-7 degradation in the brain to control neuronal activity also through a circular RNA (Cdr1) and another miRNA miR-671 in the very sophisticated network (10). Those recent findings have demonstrated that TDMD is involved in brain function and behavior of animals but not only in cell death and cell cycle regulation. Therefore, depending on the conditions (3’ complementarity and ratio of miRNA: target RNA), miRNAs control target RNAs but target RNAs can also control miRNA stability (TDMD). This bidirectional regulation may be very important for fine tuning to balance the gene expression or avoid extremely high or low expression.

For the therapeutics targeting miRNAs, perfect-matched antisense oligonucleotides (ASOs) have been used to destabilize target miRNAs in several cases (11-15) although the detailed mechanisms are not very clear. But trimming of 3’ end and degradation of miRNAs hybridized with perfect-matched ASO (possibly TDMD in RISC) may be a mechanism of suppression of miRNA function (degradation) although RNase H-dependent degradation of target RNAs in RNA/DNA duplexes could also be another mechanism (16). Utilizing those natural systems (TDMD or RNase H-mediated degradation) may be a wiser way to develop ASO therapeutics to treat human diseases in the pathogenesis that miRNAs are involved. TDMD may provide a new logical design for ASO targeting non-coding RNAs including miRNAs in potential therapeutics (17-21). Understanding the detailed mechanisms of TDMD would provide not only fundamental and basic discoveries but also new therapeutics for human diseases.

The author is grateful to the funding from the National Institutes of Health, the Wanek Family Project to Cure Type 1 Diabetes at City of Hope and the Juvenile Diabetes Research Foundation.